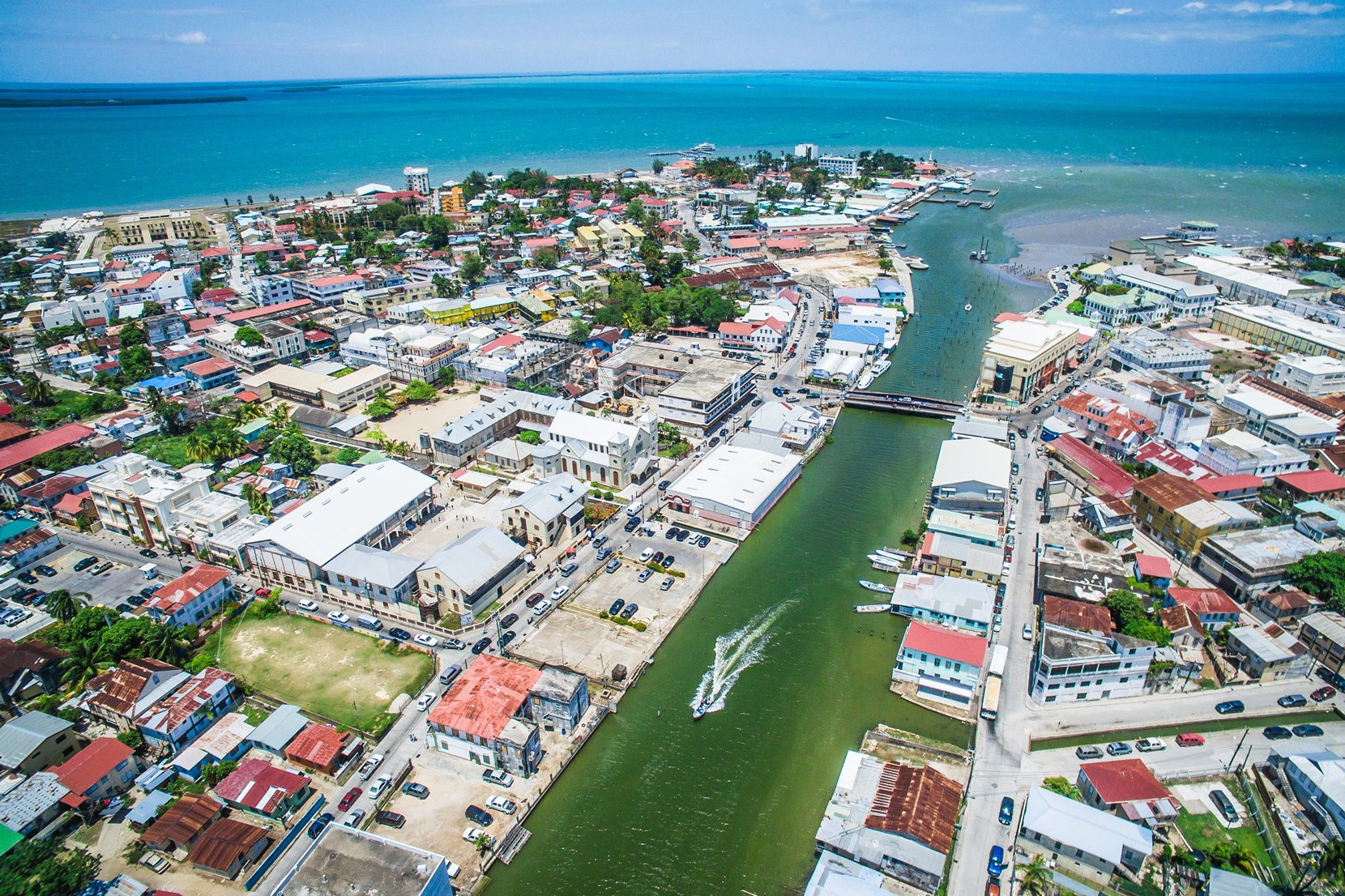 "This is it. " thought Emily "There's no going back now." She ran the special program that the Phase Two team had given her. It removed from her Mac any evidence of her communications with the Phase Two team. She prepared the house for a weeks absence, even though she knew she would never be returning.

Harry couldn't stop grinning. Soon he would be free of Emily and inherit her wealth. He wondered how long he could wait before moving Anna in without looking suspicious.

"Are you ready, Harry ? Let's Go" shouted Emily. He picked up his bags and went down stairs. They closed the front door and got into the waiting taxi.


The flight from UK to Belize took about 25 hours with two stops at New York and Houston. They were booked into The Bellvue Hotel in Belize City by the harbour. The reviews of it had been mixed, but they didn't plan to be inside for too long. Emily and Harry sat next to each other, both feigning affection to hide their true intentions. Harry's was to fake a kidnap and have Emily killed, and Emily's was to pretend to be killed and disappear forever.

The plane landed and everyone got off. The first thing that hit them was the smell of the hot, humid air, totally different from the UK. They picked-up their luggage from the carousel and made their way outside. They found the transfer bus and got on. They reached the outskirts of the city in about 30 minutes. The second thing that hit them was the poverty on the outskirts of Belize city and the wealth at the centre. Belize was well-known for it's offshore banking and a fair amount of money laundering. To the west was Mexico and Emily wondered if a visit was worth the effort.

They got off the bus, booked into the hotel and got shown to their separate rooms but with a shared bathroom. Harry sat on his bed, got his phone out and ran a special app that would ping their location to the gang members waiting just outside Belize city, totally unaware that the gang members were in-fact ex SAS working for the Phase Three team.

Emily lay on her bed and went through all the events over the last year. Had she forgotten anything ? would the Phase Three team be convincing enough to fool the local police, the UK police who would certainly be sent to investigate. Would they fool Harry. Their hike would start tomorrow, so she had a few hours in which to grab some sleep. She had a quick shower and got into bed.

"Hey ! what you doing !" the sound of Harry shouting next door woke Emily with a start. Before she could make sense of what was happening three men burst into her room and dragged her out of bed.

"Get dressed, bitch !" said one of the men pointing an rifle at her head.

"WOW these guys are pretty convincing ... if not a little early !" thought Emily as a rifle butt smashed into her stomach. Despite the pain she quickly put on some clothes and was dragged into the hall. She made a mental note to suggest that the Phase Three team go a little easier on the next customers. Also in the hall was Harry with blood streaming down his face. He tried to struggle away but got hit in the face again, and collapsed to the floor.

"What the hell..." Emily didn't finish her sentence because she was being dragged down the hall by her hair. She made another mental note to suggest the the Phase Three team be replaced completely. They were followed by an unconscious Harry being dragged by two of the gang. They were both dragged outside and into a waiting van which drove off.

The ride was quite rough but eventually they stopped and the doors opened. "Get out." said one of the gang. Emily complied but unconscious Harry had to be dragged out and was dropped on the ground. Emily looked around her at the surrounding jungle. In the distance, above the treeline she could see the Mayan Ruins.

"Shut up !" snapped one of the gang pointing a rifle at Harry's head.

"Hey ! I'm Harry, aren't we supposed to be working together ?" asked Harry a bit confused.

"We don't work with no one, certainly not stupid pricks like you." snapped one of the gang "Is this the bitch with the money ?" he continued pointing at Emily.

"The one where I pay you to kill Emily and let me go." said Harry hoping that the gang's absent-mindedness was just a joke. Even though Emily knew about Harry's plan she still looked at him in horror.

"You didn't make a deal with any of us." replied the leader "And what do we need a spineless dick like you for anyway ?"

"Hey ! we made ..." There was a loud bang. Harry was unable finish his sentence.

"Drag that stupid cunt's body over there. The local critters will have a feast tonight." The gang leader turned his attention to a horrified Emily.

"OK bitch, I hope you have a LOT of money, you'll join your husband if you don't." The leader pulled out a sat-phone, dialled and waited for the other end to answer.

"Hi Boss, We got them. We had to kill her idiot husband ... he kept going on about some stupid deal. OK ... we will be there shortly." He hung-up and put the phone away.

"OK, lets go. The boss is waiting." They dragged a terrified Emily back into the van and drove away. After about an hour they stopped and dragged her into a small nissen hut. Inside was a row of chairs and a table with a couple of laptops.

"Ah ! Emily Harrison, glad you could make it." said the boss with a big smile.

"Who are you ? what do you want ?" asked Emily wondering if she really wanted to know the answer.

"Oh, it's quite simple, Mrs Harrison. You're very rich, we're very poor and over the next few hours we're going to suck you dry." said the boss. "Financially speaking, of course." he added, just in case Emily thought they were going to suck out her insides through a straw.

"But, but how, I can't access my bank here !" said Emily hoping that might put them off.

"We might be poor but we're quite sophisticated." explained the boss "We have an internet connection here linked to a VPN all the way back to the UK. As far as your bank is concerned you will be logging-in from the UK so that shouldn't be a problem"

"And if I don't ?" asked Emily knowing for certain she would not like the answer.

"We'll start cutting bits off you. Lower extremities first so you can still type." explained the boss in a disturbingly calm voice.

"Right lets get started." The others sat by the laptops and started typing. Emily was sat in front of one laptop. A sheet of paper was put in front of her with a long list of sort-codes, accounts and amounts.

"OK, Mrs Harrison. You are going to log-on to your bank, you are going to make payments to each of these accounts. Small, random amounts first, and we'll see how we get on."

"No, I won't !" shouted Emily. The boss nodded at one of the gang members, who then picked up a chain saw.

"OK, OK" Emily started typing her bank's web address in the browser and the bank's main page appeared. She clicked 'Log-in' and started typing her details. It required a PIN Sentry which was then supplied. Her suit case was pulled from the van into the hut and opened. One of the gang pulled out her purse, removed the credit cards and put them on the table. She popped one of the cards into the PIN Sentry and entered her PIN. She copied the eight numbers into the bank's log-in page and her accounts were there for all to see. Only Emily knew that most of the money had been moved out some weeks before.

"Most of it is in property or investments" explained Emily, hoping that might curtail things a bit.

"OK, whatever, get transferring to our accounts" said the boss.

"What the hell happened to those ex SAS blokes ?" thought Emily "Aren't they supposed to be super soldiers or something." She entered the first sort-code, account number and £10,507.44. She was about to press 'Enter'.

"Has anyone seen the guys outside ?" asked one of the gang. The others looked up out of the windows expecting to see a couple of roving patrols but saw nothing.

"Go and see what's happening, I bet they've gone to sleep again !" said the boss pointing at one of the gang.

"OK boss !" he replied walking towards the door. There was a gun shot, and he dropped to the floor. A few more shots and the entire gang were on the floor in pools of blood. Emily was paralysed with fear.

"What ... where." said Emily turning around. A couple of men dressed in combat gear walked towards her.

"Please don't hurt me." she begged.

"We're not. We're here to rescue you. We're the Phase Three team" replied one of the men.

"Oh thank God !" replied Emily "What the hell happened ?" she asked. "Where were you ?"

"You were kidnapped for real by one of the local gangs. We tracked you by the black phone in your bag, the one we gave to you a while back." he explained.

"Don't worry, that happened to me the first time I did this !" explained the man,

"When did you ever get kidnapped at gun-point ??" asked an astonished Emily

"Allow me !" said the man emptying half his magazine into the laptops. "Ready ?"

"Yes." said a very relieved Emily. She passed him the paper with the gangs bank accounts on. "You might find this useful" she added.

The other men placed explosive charges around the hut. They moved outside, along one of the paths until they got to a small truck. They all got in and drove away.

"Emily, our job is to drive you to the drop-off point. Another team will take you to your new place." shouted the leader of the Phase Three team over the noise of the truck. In the distance was an explosion.

"Sorry, can't tell you ... we don't exist !" explained the team leader. They drove for a long while. Soon they came to a clearing a few miles from Belmopan. There was a small airstrip with a small single-prop aeroplane at one end. As they approached the plane started it's engine. The truck pulled up near the plane and stopped.

"OK Emily, this is where we part company. Good luck in your new life."

"Thank you so much." said Emily. She jumped down from the truck and got into the plane. She sat down, put on some headphones and looked out of the window. The truck was driving away back into the jungle. The plane accelerated down the runway and took off. Emily looked down at the jungle below, somewhere down there lay the body of her husband. She wondered how long it would remain undiscovered.